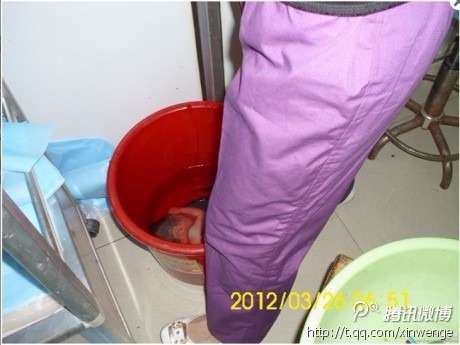 (Ministry of Tofu) The news and image of a dead baby in a bucket came from a Tencent Weibo posting in Baidu’s discussion forum: China Central family planning authorities in Moshan town, administered by Linyi City, Shandong Province.

China Regime henchmen forced a 9 month pregnant woman to have an abortion which according to the post, even the baby cried when it came out in accordance with President Obama’s Approved China One Child Policy and partially funded by the American taxpayers in which I have written about here  here here and here which the Obama mania dinosaur media remains mostly silent.

Related: Women Forced to Abort –Washington Times   110 Belly Button Piercing    and if you are a tattoo fan then please check cool tattoos ideas for girls!

Next post: Why there won’t be an economic recovery under Obama